Enroll now in our mobile machine learning masterclass to get all of these topics and learn from the comfort of your couch. Now dirt cheap at https://training.mammothinteractive.com/p/mobilemachinelearning/?product_id=509994&coupon_code=SPECIALBLOGCOUPON

Learn now in our master course with app developer Nimish Narang! 90% off today with this coupon: https://training.mammothinteractive.com/p/mobilemachinelearning/?product_id=509994&coupon_code=SPECIALBLOGCOUPON

Learn to code for Android app development in Mammoth Interactive’s latest course. A Comprehensive Beginner’s Guide to Coding in Kotlin is perfect for beginner coders or anyone wanting to learn Java’s replacement language.

ENROLL NOW WITH THIS COUPON.

Kotlin is the brand-new programming language for Android app development that is taking Java by storm. Join programming expert Nimish Narang in this course on the basics of Kotlin. Nimish has extensive experience teaching app development as an instructor at Mammoth Interactive. Start learning to code today in this Number 1 course on Kotlin.

Is this course for me?

This course is devoted to Kotlin’s language basics and comparing the syntax to Java. We target beginners and cover core topics in depth. If you’re an intermediate or advanced coder, you can watch the videos at a faster speed using the Speed tool. We encourage you to follow along with the coding as we show you Kotlin’s unique syntax.

What Will I Learn?

1. The major concepts involved with variables, basic types of variables, more advanced types, Kotlin’s new syntax for variables, and how we can use variables differently in Kotlin than you may have already seen in other programming languages.

2. Collection types, which Kotlin allows us to customize. We’ll begin by looking at the simple collection types and then look at more advanced ones. 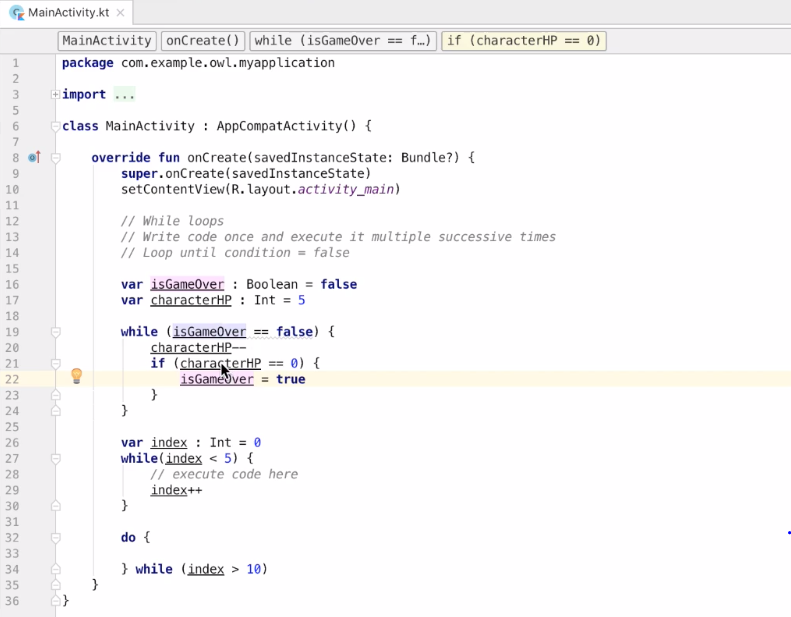 3. Control flow. Kotlin has some new statements not found in Java. Kotlin also provides the brand-new ability to turn control flow statements into expressions, which is a powerful capability that has a lot of potential. We will look at the basics and syntax, always relating back to real-life examples. 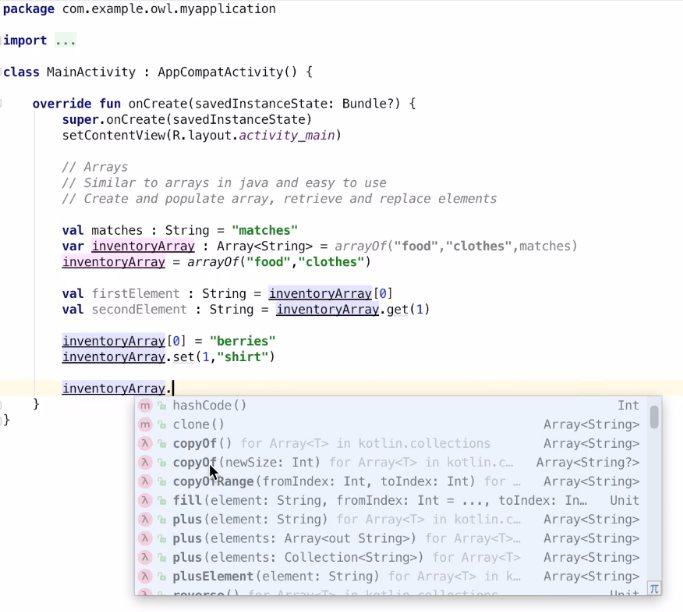 4. Functions, which have significant syntax differences in Kotlin. Beginners will learn how to use functions, and more advanced developers will benefit from the introduction to Kotlin’s new syntax. 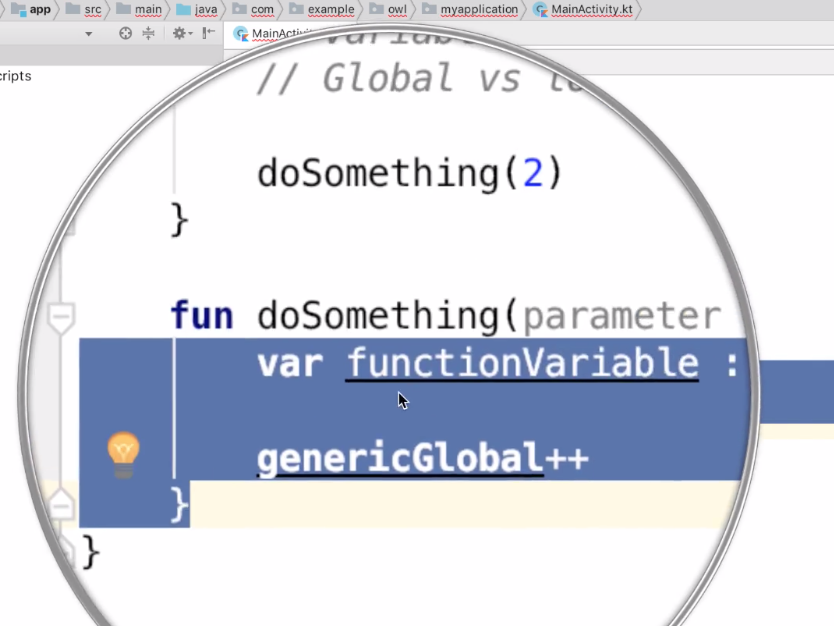 5. Classes, objects, and other structures available in Kotlin. 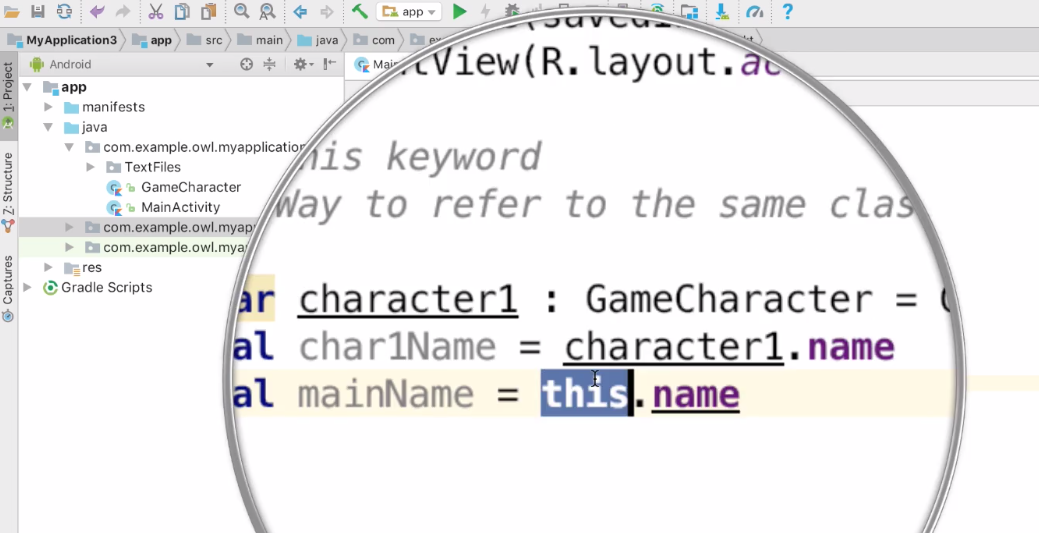 Why Should I Learn Kotlin?

Kotlin is an innovative programming language for app development. You don’t have to use Java to make Android apps anymore! With Kotlin, you can write concise and powerful code. Kotlin is awesome because it is compatible with existing Java-based technologies.

Throughout the course, we will compare Kotlin and Java. Java is a popular programming language that many developers use to create content for the Web. Kotlin is a lot more syntactically flexible than Java. This allows you to have more fine control over how you write code to accomplish the tasks you want. You can insert an aspect of personality into code and write it how you want it to be read. It’s easy to incorporate Kotlin into existing projects and applications.

What are the requirements?

Take this course to learn how to code apps faster in an emerging programming language. Enroll today to join the Mammoth community.

Stay in touch with us:

If you want to take mock exams to prepare for your certification in these IT topics, check out certification-questions.com. They offer practice tests and resources for those interested in learning a variety of software.

Stay in touch with us:

Learn how to make 20 games in GameMaker.

The Complete Java and Android Studio Course for Beginners

✔ learn the fundamentals of coding: variables, statements, functions
✔ build different apps, including calculators, games, and maps
✔ get 94% off

Build “The Legend of Zenda” in Unity3D and Blender.

Ultimate TVOS Guide for Beginners. Learn to code in Swift 3.

✔ be able to code in Apple’s programming language
✔ navigate the Xcode interface
✔ make a Quiz app, a Dialogue Tree app, and an Interactive Story app
✔ get 96% off

Make a Ninja Survival game in Unity and Blender.

✔ learn Unity, Blender, and C#
✔ set up and code a fully functioning game from scratch
✔ draw ninjas, enemies, and other art assets
✔ get 96% off

Learn how to make a Super Marlo Run game.

✔ learn Unity, Blender, and C#
✔ make speed blocks and enemies
✔ design the background and interface
✔ get 96% off

Picture this: you have a user that wants to specify the details of a product. Today we’re going to be looking at a user who inputs the make, model, and manufacturing year of their car, and we want Java to display the inputs as a message.

If you want to learn more coding for FREE, check out our 30-minute beginners course here: training.mammothinteractive.com/p/learn-to-code-in-30-minutes

When an object is created, Java first executes the code in the constructor. The constructor will then invoke that object. In this example, we’ll look at both default and customized constructors in a Java class. So let’s create a class! To follow along in Android Studio, go into Project view. Then go to app > java. Right-click on the topmost com.example.zebra.demo. Select New > Java Class.

The tab “Create New Class” will pop up. Let’s name our class “Car”. You should see the following on your screen:

As you can see, we have created our new class. It will also appear in Project view inside the same folder that contains the MainActivity class.

Before we create constructors, we have to instantiate a couple of fields. In the public class Car, let’s declare some fields. Note that, unlike in this example, these fields are usually private, meaning that they can only be accessed in this class. In your public class, create two public strings named make and model. Also create a public integer variable for the year in which the car was manufactured. Name it yearManufactured. Note that each of these lines must end in a semi-colon.

Now that we have created some properties for the car object, we have to create a constructor. First let’s trying using a default constructor. Note that a constructor takes the same name as its class. Still within the public class, type the following:

Instantiate the fields by adding onto the constructor so it looks like this:

We also want to display a message on the screen. To set the message, on the next line, create the string message, and set it equal to the properties that we created in the Car class.

Note that because we added \n to the last two lines, our message will be displayed on three separate lines.

To display our message, we can use the Toast utility in Android Studio. On the next line, type in “Toast”, select “Create a new Toast”, and hit Enter. Android Studio will auto-complete the following code:

To specify the message we want to display, edit that code so it looks like this:

Run the emulator, and zoom in. Because we used the default constructor, you will see that the defaults we created will be shown on the screen:

Below the default constructor, add a customized one:

These are the parameters that the users of our application will input. For instance, a user will specify the make of a car, such as Honda, then the model, such as Civic, and the year manufactured, such as 2013. Since these are specific values, we have to make sure that our fields store these values. In the customized constructor, type the following lines:

This code means that your field that stores, for example, the make is equal to the make that the user inputs in the initialization of the object that we just specified in the parentheses.

Let’s see how this customized constructor works. Instead of having the Car instantiate the constructor without any parameters, we’ll specify for the make, model, and manufacturing year of a car. In the parentheses after Car myCar = new Car, type: "Honda", "Civic", 2013.

If you run the emulator, you will see the following:

All done! Now we’re able to store specific values inside fields. If you want to learn even more coding for FREE, check out our 30-minute beginners course here: training.mammothinteractive.com/p/learn-to-code-in-30-minutes